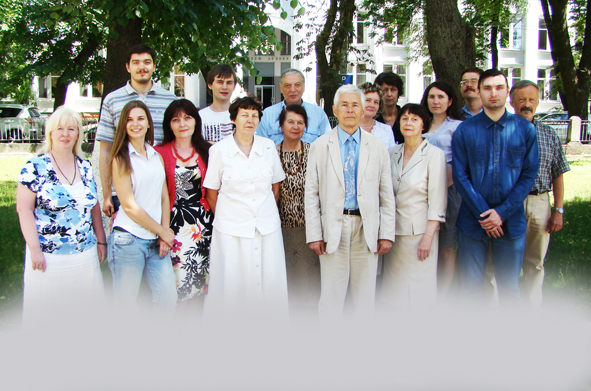 Dr. Sc., Corresponding Member of the National Academy of Sciences of Ukraine

Main line of research is focused on studying mechanisms of the fibrin polymerization and subsequent formation of fibrin 3-D net – the core of blood clots; on the search for low-molecular inhibitors of fibrin polymerization and platelet aggregation, on developing immunodiagnostic test systems for early diagnostics of the danger of thrombus formation and for control of anticoagulant therapy’s efficiency, on the design of highly efficient haemostatic compounds.

Currently the Department is staffed by 3 Doctors of science, who are also professors, 10 Candidates of sciences and 13 fellow scientists and engineers.

1. It was shown for the first time that the cleavage of fibrinopeptides A from fibrinogen by thrombin resulted not only in the exposition of the sites of intermolecular binding that leaded to monomeric fibrin association to protofibrils, but also in the structural rearrangements in the coiled-coil region of the molecule. This structural change leads to the exposition of sites functioning during lateral association of protofibrils.

4. For the first time, we have shown that 5, 11, 17, 23-tetrakis[bis(dihydroxyphosphoryl)methyl] calix[4]arene (С-192) and its sodium salt (С-145) are highly efficient low-molecular inhibitors of fibrin polymerization; the mechanism of their inhibitory action was researched. It was shown that they inhibit the first stage of fibrin polymerization – the formation of protofibrils, by blocking the A-site. The calix[4]arenes were shown to inhibit coagulation of human blood plasma, prolonging prothrombin time and partially activated thromboplastin time, and influence neither the activity of Factor Ха or trombin nor platelet aggregation in vitro. Bearing in mind the properties of the studied calix[4]arenes С-192 and С-145, the compounds can be used as the base for developing antithrombotic preparations.

5. We have obtained three monoclonal antibodies specific to fibrin, D-dimer and fibrinogen and designed three immunodiagnostic test systems: DIA – Soluble Fibrin, DIA – D-dimer and DIA – Fibrinogen for quantification of these molecular markers in human blood plasma for diagnostics of the threat of thrombus formation. The test-systems were tested using blood plasma of patients suffering from diabetes, cardiovascular diseases or those who underwent surgical interventions.

6. Using the developed method we separated and characterized a novel fibrinogenase from the venom of Echis multisquamatis, which was seen to cleave the peptide link ВβR42-A43 of human fibrin(ogen). Using the enzyme and the limited proteolysis method we clarified the role of ВbN-domain of human fibrin(ogen) in the fibrin clot formation mechanisms, in non-enzymatic activation of prothrombin and platelets aggregation. We also studied the fibrinogenase’s anticlotting and profibrinolytic properties. Its effect upon the haemostatic potential of blood plasma makes this fibrinogenase a possible thrombolytic and anticoagulant agent.

7. We have developed a novel method of covalent immobilization of a fibrin-specific monoclonal antibody to the gold coating of the chip for SPR-spectrophotometer Plasmon and devised immunosensor chips with the mAb to fibrin, D-dimer and fibrinogen. We have also developed a model of a multichannel immunosensor camera for SPR-spectrophotometerPlasmon. The sensitivity of anti-fibrin chip was shown to be 100 ng/ml, and anti-D-dimer one – 250 ng/ml. The chips were shown to be reusable and regeneration conditions were determined. The method is faster than ЕLISA and can be successfully used for express-diagnostics of the threat of thrombus formation.

8. To develop immunodiagnostic test systems for quantification of protein C in human blood plasma we determined in silico two unique amino acid sequences in the protein C that have minimal homology with the respective amino acid sequences in other factors of blood coagulation. They were conjugated to carrier proteins to obtain antigens to immunize mice. A monoclonalantibody, highly specific to protein C, was therefore obtained. This is a work in progress.

9. We have developed a fibrin composite based on autologic plasma which can be used in orthopedics traumatology, and combustiology. The autologic fibrin composite obtained by mixing the patient’s blood with prothrombin activator, allows us to regenerate the afflicted osteal and soft tissues and to suppress inflammatory processes. Using the prothrombin activator instead of thrombin ensures the absence of immunogenicity or irritation of adjacent tissues and prevents hematogenous viral infections like hepatitis and HIV.