DEPARTMENT OF SCIENTIFIC AND TECHNICAL INFORMATION 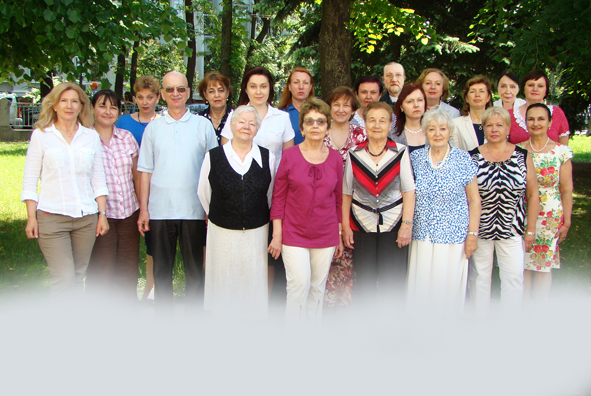 Sector of the Patent-License Investigations was created at the Institute in 1980, it became a part of the Department in 1993, and in 2008 it was reorganized and renamed into the Sector in the Problems of Transfer of Technologies, Innovation Activity and Intellectual Property. From 1993 to July 2012 the Sector was headed by O.P. Kozulina, Cand.Sc. (Biol.). Since July 2012 it has been headed by G.F. Lugovska, Cand.Sc. (Chem.).

The basic tasks of the Sector are as follows:

The total number of applications for inventions and useful models during 2010-2015 was 28;

(including 4 in Chinese People’ Republic (ChPR), 3 of them in co-ownership with the Institute

of Biology of Shandon Academy of Sciences of ChPR; 2 trademark certificates for

Ukrainskybiokhimichnyzhurnal(since 2014 р. – TheUkrainianBiochemicalJournal)was founded in 1926 in Kharkiv by Academician O.V. Palladin as Scientific Records of the Ukrainian Biochemical Institute; The Editorial Board of the journal was incorporated in DSTI in 2013. Executive secretary till 2012 was A.P. Demyanenko, Cand.Sc. (Biol.), since early 2012 – M.V. Grigorieva, Cand.Sc. (Biol.). Within the reporting period (2010-2015) 36 issues of the journal have been published. The total volume of materials printed in the journal was 2 000 conventional printed sheets, that exceeds considerably the projected one. The journal is abstracted or indexed in Pubmed, IndexMedicus, CurrentContents, ScienceCitationIndex, Dzherelo, and other databases. Electron version is sited on portals of Elsevier, EBSCO. A separate site of the journal http://www.ukrbiochemjournal.org/ has been created.

Journal Biotekhnologia (BiotechnologiaActa) was founded in 2006 as a part of DSTI; it has been regularly issued since 2008. Executive secretary is A.S. Vinogradova. Within the reporting period (2010-2015) 34 issues of the journal have been published. The total volume of materials printed in the journal was 2 000 conventional printed sheets. The journal is represented in such databases as PresPoint (Cambridge), EBSCO(USA), Cornell University Albert R. Mann Library (USA), Chemical Abstracts Service (USA), RINC (Russian Federation), «Ciberleninka» (Russian Federation). A separate site of the journal: http://www.biotechnology.kiev.ua/ has been created.

Scientificlibrary (Head – V.V. Redina) was founded by O.V. Palladin in 1925 as the Library of the Ukrainian Biochemical Institute of People’s Commissariat of Education of the Ukrainian Soviet Socialist Republicin Kharkiv. It was incorporated in the DSTI in 1933. The book stock of the Library is replenished regularly, and now it is 80 000 titles, 34 000 of them are in foreign languages, the library personnel perform informational-bibliographic work, procure the stock, inform the Institute employees about new acquisitions. The electron versions of catalogues of all the library funds have been formed at the Library in the recent years. Within the reporting period (2010-2015) over 12 000 of titles of the printed production kept in the Library have been entered into electron catalogue.

Memorial Museum of O.V. Palladin (curator – V.I. Nazarenko, Cand. Sc. (Biol.)) was created in 1973 in accordance with the resolution of the Council of Ministers of Ukr.SSR; in 1993 it was incorporated in DSTI. The Museum exhibits elucidate the course of Life, scientific, scientific-organizational, pedagogical and public activities of Academician O.V. Palladin, the Institute founder, and the school of functional biochemistry, known all over the world. Being the affiliation of the State Museum of the History of the City of Kyiv, the Memorial Museum of O.V. Palladin is in fact a centre of propaganda and study of the history of biochemical science in Ukraine. The Museum carries out a systematic searching work in the history of the Institute of Biochemistry, investigation of development of its scientific trends, performs excursions, etc.

The Department took active part in preparation and presentation of the Institute elaborations in above 20 general state, international and departmental exhibition actions, in particular:

For active participation in the exhibition activities the O.V. Palladin Institute of Biochemistry was awarded numerous PRIZES and DIPLOMATA.

Scientificresearch work of the Department in 2010-2015 was directed to investigations in the fields of the history-and-science and bibliography concerning the development of the home biological chemistry aimed at the search and analysis of information on achievements of Ukrainian scientists–laureates of the O.V. Palladin Prize in the context of revealing and generalization of regularities and tendencies of development of physico-chemical biology in Ukraine, as well as in analysis of achievements of scientists of the O.V. Palladin Institute of Biochemistry of NAS of Ukraine in the inventive activity, prediction of priority trends of this activity and promising innovations.