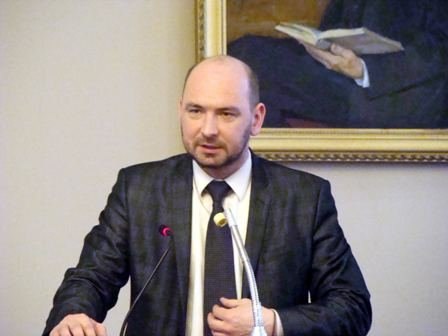 The Laboratory of Immunobiology was founded in 2011 as a part of the Department of Molecular Immunology.

At present, the staff of the Laboratory includes 1 Doctor of Sciences, 3 Candidates of sciences (PhD), 4 PhD students, 4 Technicians. 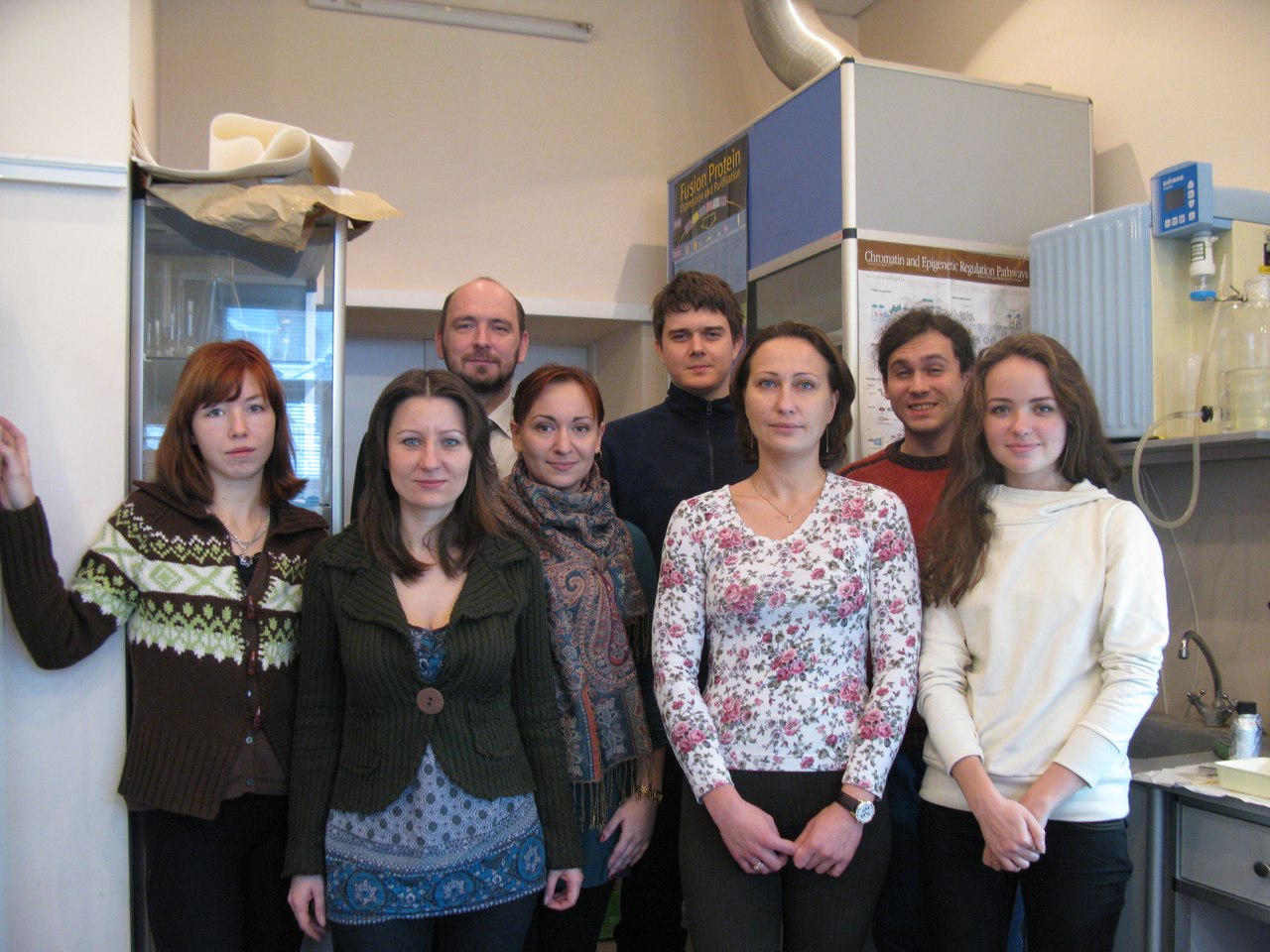 During 2010-2015 our researches were aimed at studying the interaction of diphtheria toxin (DT) with mammalian cells, as well as functions of DT receptor, the precursor of heparin-binding epidermal growth factor-like growth factor proHB-EGF. Development of new biotechnological products and diagnostic systems based on recombinant fragments of DT and proHB-EGF were also carried out.

DT is the main pathogenicity factor of Corynebacterium diphtheriae. This single-chain 535 amino acid long protein causes the symptoms of acute diphtheria infection. DT could be extremely cytotoxic for eukaryotic cells. LD50 of DT for sensitive organisms is one of the highest among other bacterial exotoxins. The cytotoxic action of DT is mediated by catalytic transfer of ADP-ribosyl group from NAD+ to the diphthamide residue (modified histidine residue) in eukaryotic translation elongation factor 2 (eEF-2). This leads to an almost complete arrest of protein synthesis in the cell and its death.

There are some mammals, like mice and rats which are almost completely resistant to DT. The question of mammalian DT resistance is in the spotlight of our studies.

Nowadays, growing scientific interest to DT is associated with possibility of its use in medicine as a carrier protein in conjugate vaccines, a component of immunotoxin drugs, and in anticancer therapy. On the other hand, DT represents a very interesting molecular machine which allows using this protein in different bioengineering applications, such as ablation of certain cell types in transgenic mice, development of immunotoxins targeted for specific cell markers and also for delivery of certain proteins into the cytosol.

DT molecule is composed of two subunits: subunit A and subunit B. The A-subunit of DT is represented by a single domain – the catalytic or C-domain which modifies eEF-2. B-subunit is composed of two domains: receptor domain or R-domain, which is responsible for binding to cell DT receptor, and transmembrane or T-domain, which is involved in the process of C-domain transfer in the cytosol across endosomal membrane.

The natural receptor of DT, proHB-EGF is a single chain transmembrane glycoprotein of 208 amino acid residues. The molecule of this receptor is composed of four functional portions: heparin-binding, EGF-like, transmembrane and cytoplasmic domains.

DT binding to proHB-EGF on a plasma membrane triggers internalization of DT-proHB-EGF complex through the clathrin-dependent endocytosis. Then pH in the endosomal lumen decreases and C-domain enters into the cytosol where it can modify eEF-2. The exact molecular mechanism of C-domain transport across the lipid bilayer is unknown but it is known that T-domain is strongly involved in this process.

Previously, we have designed genetic constructs that encode various recombinant derivatives of DT and proHB-EGF structural parts and domains. Those products were also expressed in E. coli cells and purified by IMAC. Our recombinant nontoxic toxin analogues and derivatives were applied in studying of toxin interaction with cell surface, intracellular transport of DT and in determination of proHB-EGF expression level. By immunization of animals with recombinant analogues the antibodies to DT and HB-EGF were obtained. Various products were used for development of diagnostic test-systems aimed at detection of antibodies to DT. All our DT derivatives were designed to be non-toxic for sensitive cells, so all biosafety requirements were met for safety work of laboratory personnel and protection of surrounding environment.

Most of our recombinant proteins are fluorescent derivatives of various DT and proHB-EGF. Those fluorescent constructs were obtained by in vitro combination of the parts of DT gene and nucleotide sequences for various fluorescent proteins. Fluorescently labeled derivatives were mainly used in fluorescent methods of cell studying such as confocal microscopy and in flow cytometry analysis. Life cell imaging is the most important method in our laboratory. Fluorescent B-subunit analogues were obtained and the specificity of their interaction was demonstrated with both toxin-sensitive African green monkey Vero epithelium cells and toxin-resistant mouse L929 fibroblasts. The recombinant fluorescent derivative of diphtheria toxin EGFP-SbB obtained by the replacement of toxin A subunit by enhanced green fluorescent protein, EGFP, has been used for visualization of the DT interaction with sensitive and insensitive cells.

Functional analogues of B-subunit with fluorescent label appeared to be perspective tools for studying the above mentioned functions.

It is well known that HB-EGF is a ligand of EGFR receptor which is greatly involved in malignant progression of many types of cancers. This factor is produced by proteolytical procession of DT receptor, proHB-EGF which is its transmembrane precursor. Fluorescent derivatives of B-subunit were used as diagnostic tools for identification of proHB-EGF expression on the cell surface.

It was shown that EGFP-SbB could interact with cell surface of both toxin-sensitive and toxin-resistant cells. The affinity of this protein for Vero cells receptors was three times higher as compared with 3T3 cells. It was demonstrated that fluorescent derivate was able to interact with receptors of both cell lines and to internalize into these cells. EGFP-SbB internalization into the cells was abolished by endocytosis inhibitor phenyl arsine oxide which is an inhibitor of the endosome formation. This fact permitted to confirm that internalization occurs via endocytosis.

Dynamics of the endosome number, average size, and total area, calculated from the confocal cross sections of cells at different time points of incubation with EGFP-SbB, displayed a clear difference in subunit B internalization by L929 and Vero cells. We suppose that diverse sensitivity to DT of monkey and mouse cells can be explained not only by differences in their receptor affinity for DT but also by the processes of intracellular transport that occur after the toxin internalization into the cells.

The effect of T-domain on intracellular transport of recombinant fragments of DT was studied. Edosomal traffic of R-domain was compared to those of the B-subunit. The differences in R-domain and B-subunit intracellular endosomes movement were characterized. Recombinant fragments of DT used in this work were labeled with fluorescent proteins, which allowed applying colocalization technique for our study. Application of confocal microscopy revealed differences in transportation of recombinant DT derivates in Vero cells: R-domain moved faster than subunit B to tubular compartments.

We suggest that possible role of the T-domain in intracellular transportation and compartmentalization of the toxin may be associated with the ability of the T-domain to form a proton channels and its ability to interact with COPI complex.

Subunit B of DT possesses no catalytic activity and thus it is not cytotoxic. Nevertheless, its influence on the different cells in vitro remains to be investigated. The influence of DT B-subunit on viability of diphtheria-sensitive cells was examined.

It was shown that recombinant B-subunit had a cytotoxic effect on human histiocytic lymphoma cell line U937 at a concentration of 12.8·10-7. M. Appositely, U937 has almost no proHB-EGF on its surface. Maximal cytotoxic effect had been elicited after 48 hours of cultivation in presence of B-subunit.

Realization of cytotoxic effect of diphtheria toxin B-subunit and its derivative on the U937 cell culture may occur via inhibition of mitogenic activity of soluble HB-EGF which results in apoptosis induction.

One of the most important objects is the development of new in vitro methods for estimation of DT-neutralizing polyclonal and monoclonal antibodies, which allow avoiding using active DT and toxin-sensitive laboratory animals. The new toxin binding inhibition test-based (ToBI) method for detection of protective antibodies in serum was proposed. ToBI test is based on the property of anti-diphtheria antibodies to inhibit the subunit B biding to Vero cells. This newly developed approach for estimation DT-neutralizing antibodies is more ethical and safe, and can successfully substitute the traditional methods of DT detection.

Active immunization of people with diphtheria anatoxin is widely used for prevention of diphtheria infection. Passive immunization with hyperimmune antitoxic horse serum is used for diphtheria treatment. However, diphtheria anatoxin and horse antitoxin have a number of serious disadvantages. The search for new antigens and antibodies, which can effectively protect from DT, is an urgent task in anti-diphtheria immunobiology. Comparative studies of toxin-neutralizing antibodies induction after immunization of laboratory animals with recombinant subunits A and B were carried out. The ability of subunit B to induce toxin-neutralizing antibodies in laboratory animals (rabbits and guinea pigs) was confirmed by the intradermal test and by ToBI test, developed for this purpose. The results suggest that recombinant subunit B may be used for the induction of the protective immune response.

Phage display technology is an effective approach for the development of next generation immunobiotechnological reagents. Naive murine phage display library of single-chain variable antibodies (scFv) was used to isolate scFv recognizing the DT. The immune library of murine immunoglobulin genes was constructed. A number of scFv specific to diphtheria toxin B-subunit were acquired from the obtained library after one round of selection by phage-display. Furthermore, we have constructed the naive library of human immunoglobulin genes, which allow us to obtain human scFv to DT.

To evaluate the dose-dependent immunogenic properties of poly(lactide-co-glycolide) (PLGA) particles coated with cellobiose as antigen carriers for oral immunization we have synthesized two types of PLGA-cellobiose particles (PLGA-cellobiose-1, ~0.8 μm and PLGA-cellobiose-,~1.2 μm) containing non-toxic recombinant subunit B of DT. Different doses of antigen, immobilized on the particles were administered per os to BALB/c mice. After the first immunization, an increase in concentration of blood antitoxic antibodies was detected. The most immunogenic antigen dose of PLGA particles was determined for IgG antibodies induction. PLGA particles can be considered as a potent component of oral anti-diphtheria vaccines.

Proteins MPT63 and MPT83 are common for both Mycobacterium tuberculosis and Mycobacterium bovis, due to their high immunogenicity. These proteins are thought to play a promising role in the development of immunodiagnostic reagents and vaccines. Antibody responses to purified protein derivate test (PPD-test) of tuberculin and antigens MPТ63, MPТ83 of Mycobacterium bovis were determined in bovine herd (94 adult animals).

Our results confirm that indirect ELISA with recombinant MPТ83 and MPТ63 as well as conventional PPD-tests could be used in test-systems development for detection of cow tuberculosis infection at the herd level. To enhance the antigenic and immunogenic properties of these proteins, fragments of the MPT83 and MPT63 genes were fused in tandem. The antigenic properties of the recombinant proteins were characterized. These properties are comparable to their native analogues. The anti-MPT63 and anti-MPT83 sera were found to be highly reactive against the MPT63-MPT83 fusion protein, which suggests that the fusion protein retains the antigenic properties of the parent proteins. The diagnostic tools against cattle tuberculosis was developed. This test-system was already registered in Ukraine. 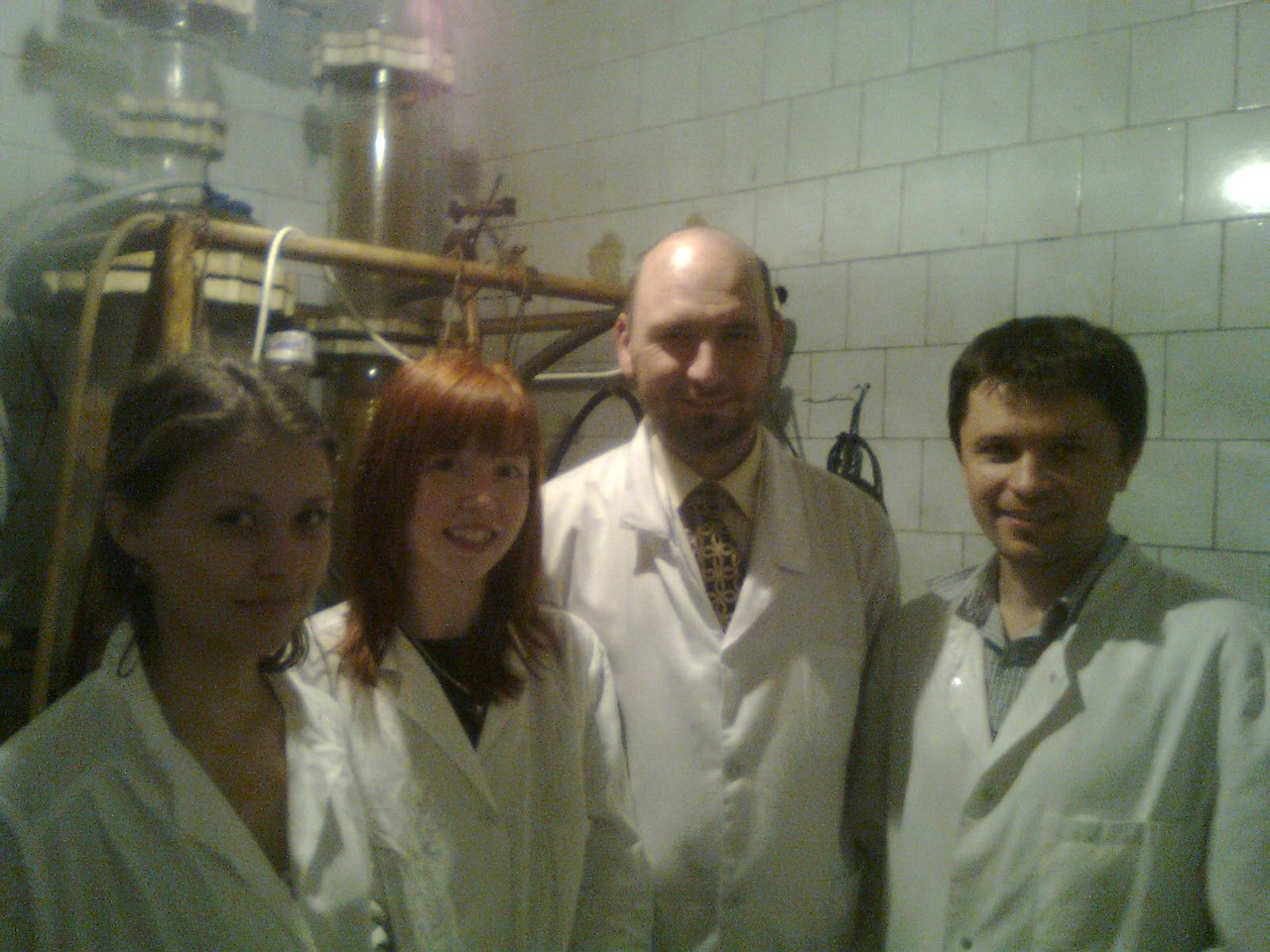 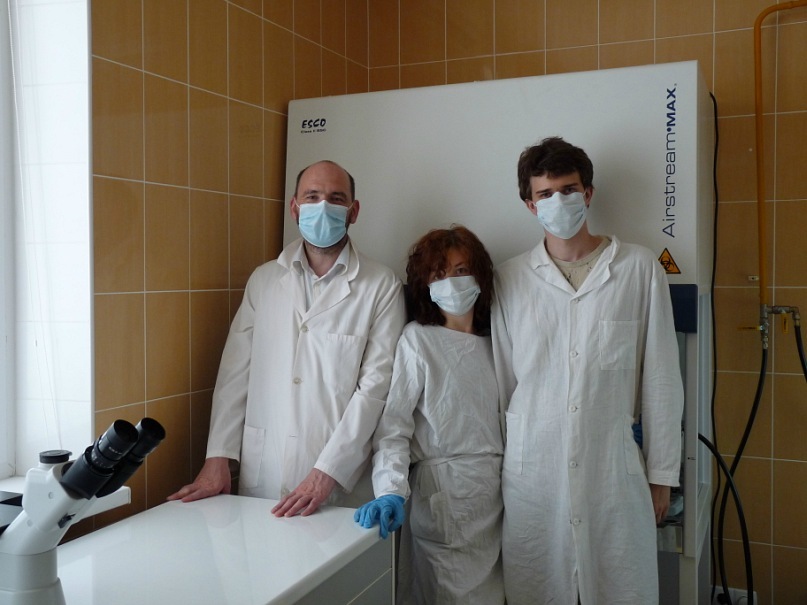 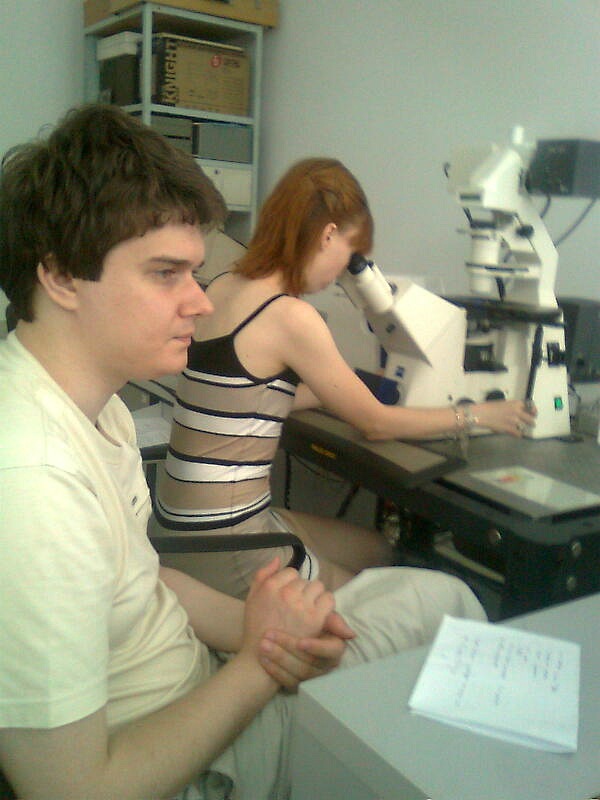 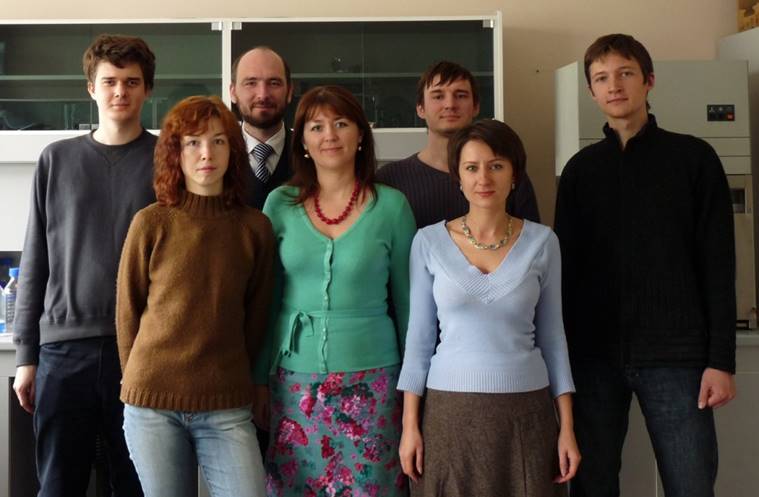