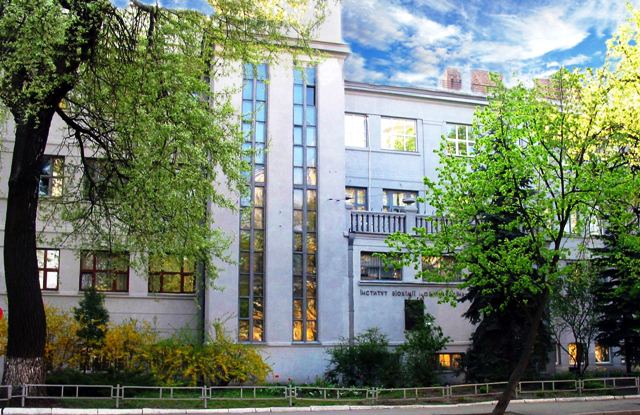 Currently the total number of the Institute employees is 278 persons, including 156 scientists. These are 3 Members and 2 Corresponding Members of NAS of Ukraine, 23 doctors and 72 candidates of sciences.

Scientific research is conducted now in the following main trends:

Scientific researches are financed by the state from the budget of the National Academy of sciences of Ukraine, as well as from out-of-budget sources – grants of the home scientific programs, foreign grants.

The following scientific units work on the Institute basis: specialized scientific centers (Center of Collective Use of Appliances, and Test Biological Center); Ukrainian Biochemical Society which has equal rights with societies members of the Federation of European Biochemical Societies (FEBS) and International Union of Biochemistry and Molecular Biology (IUBMB). The Institute issues two journals – Ukrainskyi Biokhimicheskii Zhurnal, founded by O.V. Palladin in 1926 (since 2014 – The Ukrainian Biochemical Journal), and Biotekhnologiya (Biotechnology) – founded in 2008 (since 2014 – Biotechnologia acta).

One of the oldest subdivisions of the Institute is the Scientific Library which has been working since 1925 and has a unique and rather large fund of the domestic, and foreign periodicals, monographs, reference literature in biochemistry and a series of closely-related sciences – physiology, molecular biology, biophysics, medicine, immunology’ pharmacology as well as numerous encyclopedic editions.

The Memorial Museum of O.V. Palladin, created in 1973, in accordance with the decision of the Cabinet of Ministers of the Ukrainian SSR, works at the Institute of Biochemistry. The Museum exhibits elucidate the path of life, scientific, scientific-organizational, pedagogical and public activity of the founder of the Institute and world-known Ukrainian school of Functional biochemistry. The Memorial Museum of O.V. Palladin is the affiliation of the State Museum of the History of Kyiv and actually a center of studying and propaganda of the history of biochemical science in Ukraine.

For 90 years of its history the Institute has made a considerable contribution to the treasury of achievements of the world biochemical science. Achievements of scientific schools, brilliant scientists, founders of the most important trends in biochemistry – Academicians O.V. Palladin, D.L. Ferdman, R.V. Chagovets, M.F. Guly, V.O. Belitser, S.V. Komisarenko and many others.

The Institute employees were given above 300 author’s certificates and patents, obtained a number of fundamentally new results which favor the creation of new biotechnologies, methods of chemical modification of biologically active substances, elaboration of tests to perfect the diagnosis and therapy of various diseases. By the way, we should call some of them, in particular, a drug for hemostasis and wound healing quickening VIKASOL; protein blood substitutes (BK-8) and protein drugs of blood coagulation system (factors VIII and IX); antitumor drug MEBIFON; anti-alcohol drug MEDIKHRONAL; vitamin-mineral complexes with  vitamin D3 for treatment of osteoporosis and bone system as a whole: VIDEIN, water-soluble drug of vitamin D3 for babies, KALMIVID-M, MEBIVID; drug for raising organism viability METOVITAN; test-systems for diagnosis of thrombogenesis, immunodiagnostic test-systems for screening of anti-diphtheria immunity and tuberculosis, sets of highly efficient additives to fodder of farm animals, etc. A series of crucially new results which favor creation of up-to-date biotechnologies , nanobiotechnologies in particular, elaboration of analytical devices of a new generation of biosensors, methods of chemical modification of biologically active substance of natural origin, development of tests for the improvement of diagnostics and therapy of various human diseases.

A unique collection of hybridomas – producers of monoclonal antibodies for diagnosis of the systems of hemostasis, tuberculosis, diabetes, pertussis and some other diseases – has been created within the recent years in the Institute.

It is difficult to evaluate exactly the economic, social and scientific effect from the Institute activity, but it may be stated that the contribution made by our scientists in total to medical practice and national economy is extremely significant.

Numerous employees of the Institute were honored with state awards for considerable contribution to development of fundamental biochemical investigations, training of scientific personnel, elaboration of a number of technologies of production of new medicines and biologically active substances, as well as tests for perfecting diagnosis and therapy of various diseases. In due time Academician O.V. Palladin was given the title of a Hero of Socialist Labor, and Academician M.F Guly – the title of a Hero of Ukraine. The Institute researchers were rewarded with 16 State Pries of the USSR and Ukrainian SSR, 20 O.V. Palladin Prizes of NAS of Ukraine; nine scientists were given the status of Honored Science and Technology Worker of Ukrainian SSR/Ukraine

The Institute of Biochemistry keeps up the best traditions founded by coryphaeus of home biochemistry – Academician O.V. Palladin and his closest followers, which have laid the basement for development of biochemistry in the new 21st century. The Institute is the generally recognized leader in its field.